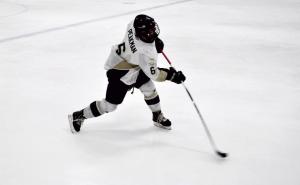 Both teams were nationally ranked. They were amongst the top 2-3 in scoring boasting over 200 Goals For - an explosive offense and we were equally impressive on the blueline. Our goalies were also amongst the best in the league. Over 7 players from each team were awarded League Players of the Week. Several were awarded Players Of The Month. And numerous Eels were selected by the league as All Stars. Again one hell of a year for our players and our teams.

The Eels are a unique program in that they are not here to make you into a better Junior player. Our mission is to prepare you to become a college hockey player. We realize that most players have the dream of becoming a college hockey player. But having a dream is not sufficient. You have to plan and take affirmative steps in implementing determinative actions to accomplish these goals. It isn’t easy. If it were every hockey player would make it. On the contrary, it is probably one of the hardest things you will ever do in your life.

It requires that you be the most dedicated, determined and focused player you can be. It seems odd, but trying is not enough. Doing your best won’t get you there. You have to outwork everyone. Push your body and mind to the limits. The efforts also require you to be showcased are exposed in front of college coaches and recruiters. Moreover, we remind our players that the operative word in college hockey is “College” So if you are in high school you need to excel in your grades and SAT/ACT scores with the same vigor and intensity as you take the ice. If you graduated we encourage you to take two college courses per semester. We monitor all of your academics to ensure excellence and compliance.

To reach these ends we have actions plans. These include the most comprehensive ice and off ice training in junior hockey. We mirror the NTPD, NCAA Div I and III colleges and the USHL. This includes 5 practices per week of ice and 5 off ice strength and conditioning workouts 40 weeks out of the year. This amounts to 600 hours of training. Then 44 league games and at least 5 additional scrimmages against ACHA college teams. Then we attend 4 in season showcases and most players join us in 3-4  post season showcases. This provides maximum exposure and visibility to college scouts. You won’t find a parallel program of its kind.

This is our recipe for success. The fruits of our training have realized over 233 Eels alumni reaching the college ranks. This is coupled with 12players will advance to college year.   In One Year! In fact in the last 4 seasons, we have moved 60+ players on to college.  We invite you to be part of this rich and storied program. You are free to write your script. Allow us to implement your dreams.

The Eels are a flagship program in the USPHL. Our league has advanced 2,500 players to college. We currently have over 1,100 alumni playing college hockey. The Eels have 233 alumni who have advanced to college. Now that is impressive.   We hope you will be part of this program. In the USPHL you have the Best League The Best Teams The Best Coaches and the Best Players.